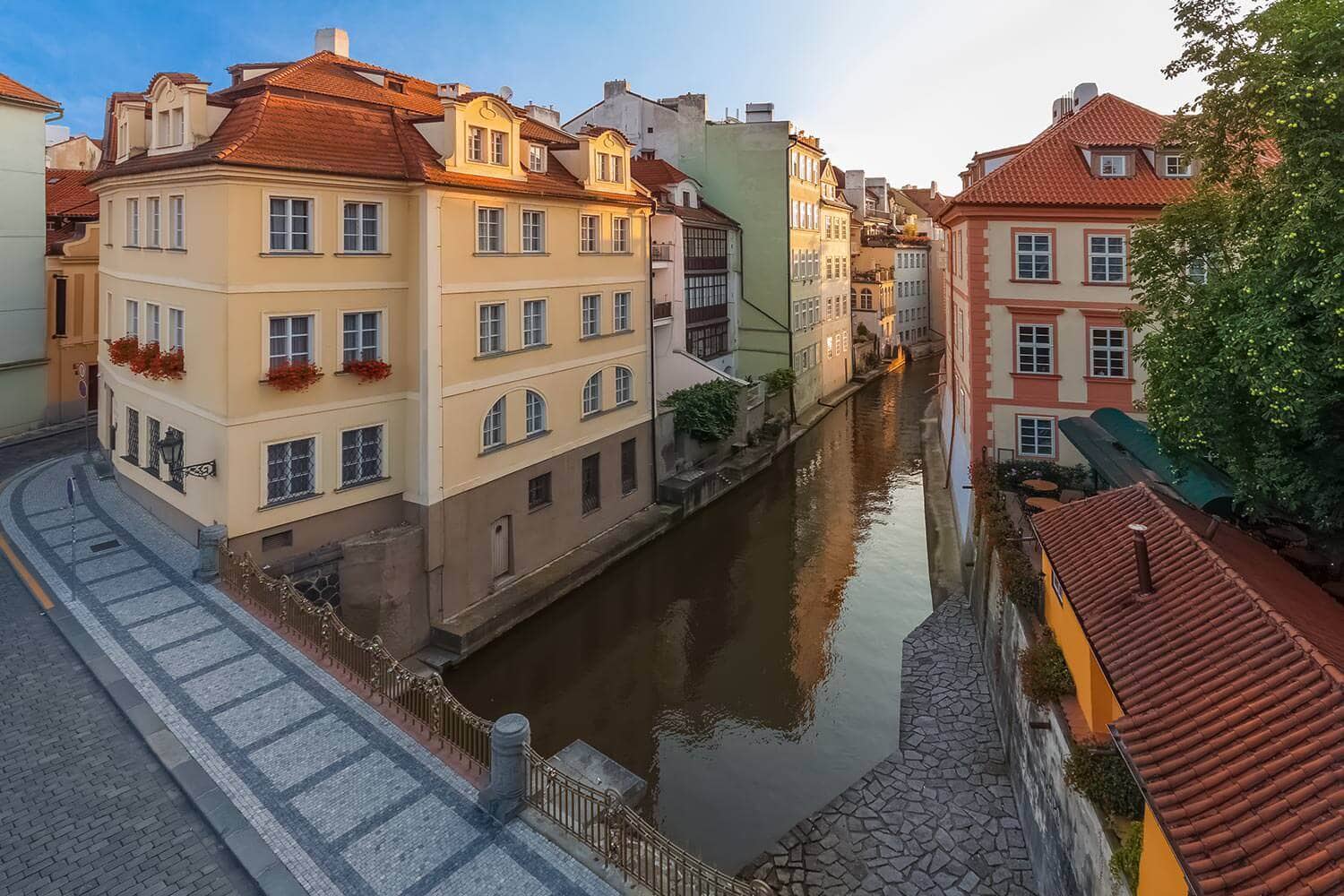 The Čertovka is a very picturesque man-made channel on the western side of the Vltava river in Prague. The name can be translated as the Devil‘s Stream of Devil‘s Channel. The construction of the canal has created an artificial island in Prague. This island between the Čertovka and the Vltava is called Kampa and it is quite an interesting place in its own right.

The Čertovka is 740 m (0.6 mi) long. Its beginning is near the northern end of Malostranské nábřeží and it flows back into the Vltava behind Charles Bridge. The canal thus flows through the Lesser Side (Malá Strana) throughout its entire course.

The Čertovka was created by the Knights Hospitaller in the Middle Ages. The purpose of the canal was providing a regulated water flow for the mills that would be built along its course. Three of those watermills have survived to this day.

The best known of them is the Grand Priory Mill (Velkopřevorský mlýn). It is visible from Charles Bridge; on the left side – if you’re going towards Prague Castle. The name of the mill refers to the Grand Priory of the Sovereign Military Order of Malta, a.k.a. Knights Hospitaller. An alternative name of the watermill is the Maltese Mill (Maltézský mlýn). It was also known as the Stephen’s Mill (Štěpánovský mlýn), as its owner in the 16th century was a miller named Štěpán (Stephen).

The Grand Priory Mill doesn’t serve its original purpose anymore. The wheel is a reconstruction and its function is purely decorative nowadays. The building has been the seat of several Czech companies in the recent history.

The name Čertovka is relatively new. It dates back to the 19th century. Before that, several other names had been in use, e.g. Strouha or Malostranská. The current name is probably derived from the name of a nearby house – „U sedmi čertů“ (“At the Seven Devils”). The address of this house is Maltézské náměstí 476/14. However, there are also other theories about the origin of the channel’s name.

Not far from the Čertovka and Charles Bridge, you can see a true curiosity. A tiny street leading from U Lužického semináře Street to a restaurant garden is so narrow that traffic lights had to be installed. It is too narrow for two people, so the traffic must be organized. As a matter of fact, the passage might be even too narrow for one person wearing XXL-size clothes. This street has no official name. In Czech it is commonly referred to as nejužší pražská ulička (“the narrowest street in Prague”). The name mentioned by some other online sources doesn’t seem to be official and does not appear on maps. To find it, go to U Lužického semináře Street and find the house with the number 24.

The Čertovka is a very picturesque fragment of the Czech capital, even though it does not belong to the city’s top tourist attractions. It is sometimes called “the Prague Venice” (Pražské Benátky). Some houses along its course stand very close to the water, just like the ones in Venice.

Would you like to see the Čertovka from a different perspective than most tourists do?
Are you coming to Prague and would like to stay near the Čertovka?
Here are some great accommodation options:
Interests: citieshistory World Heritage Sites
Image Credits (from top to bottom, and left to right):