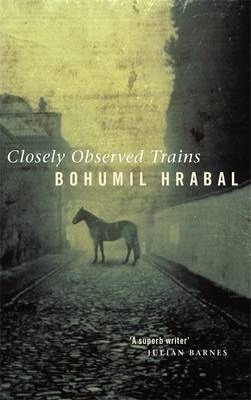 Bohumil Hrabal’s novel is a classic position of Czech postwar literature. Miloš Hrma works as an apprentice at a small but strategically situated train station in occupied Bohemia during the last months of World War II. The novel tells the story of his growth from youth to adulthood.

Bohumil Hrabal (1914-1997) was one of the most acclaimed Czech writers of the 20th century. His novels and stories have been translated into more than 25 languages. He often juxtaposed the beauty and brutality of everyday life. Hrabal died after falling from a hospital window while trying to feed pigeons.

Closely Observed Trains (in the Czech orginal: Ostře sledované vlaky) was originally published in 1965. Based on the novel, Jiří Menzel created a film of the same title, which was one of the best known works of the Czechoslovak New Wave. The film won an Oscar in the category Best Foreign Language Film in 1968.