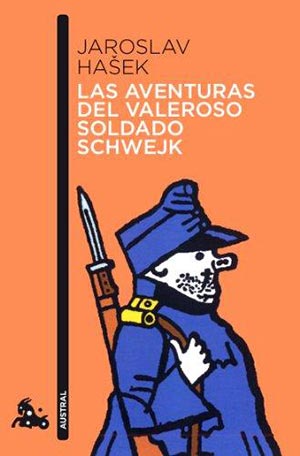 This book is one of several existing Spanish translations of one of the most classic positions in the history of Czech literature: The Good Soldier Švejk by Jaroslav Hašek. The author of this translation is Alfonsina Janés Nadal, who translated the classic Czech novel from German.

The novel’s protagonist, Josef Švejk, is a good-natured fellow drafted into the Austro-Hungarian army during World War I. His goal is to survive the brutality of the war. And he does so in his own special way: either by being an idiot or pretending to be one. He was a “certified idiot”, but was his idiocy in reality a very smart thing to do?

His character has had a profound influence especially on Central European culture. In several towns, there are Švejk statues; several pubs and restaurants have been named after him.

This book is a must-read position for all people interested in Czech culture; this translation makes it accessible to Spanish speakers. The novel is simply a timeless classic. As many other editions of Hašek’s book, this edition also includes beautiful illustrations by Josef Lada.