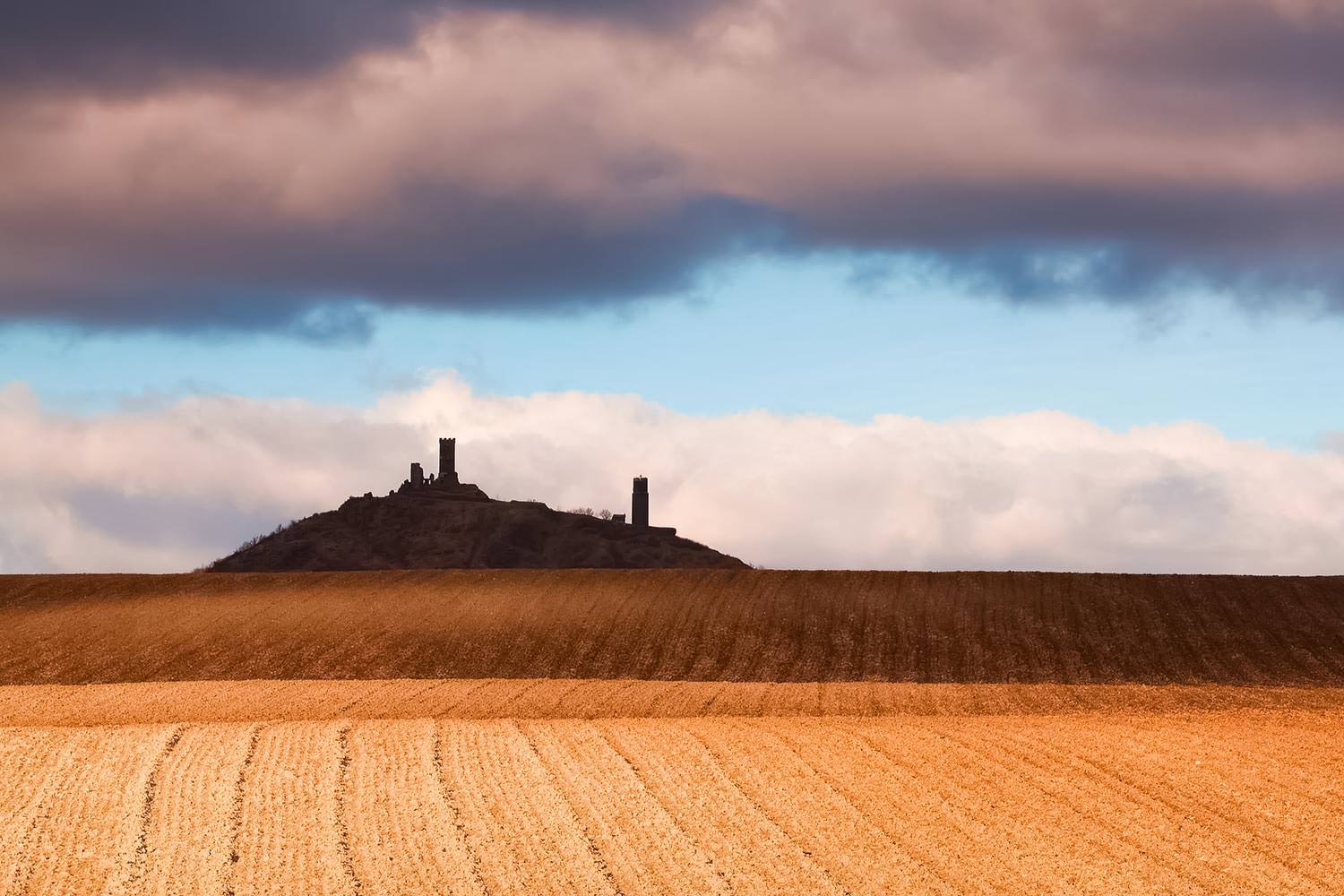 Házmburk is the name of a ruined medieval castle and the hill on top of which it is situated. Thanks to its elevated location and the relatively flat surroundings, the ruins are visible from far away. Their easily recognizable silhouette was an inspiration for artists during the Romantic period. Házmburk is located near the village of Klapý in the Ústí nad Labem Region. The nearest town is Libochovice, about 3.5 km (2.17 mi) southeast of the ruins.

The castle was built by the noble Lichtenburk family in the 13th century. Its original name was Klapý, as the nearby village. In the early 14th century, the king John of Bohemia (Jan Lucemburský)  acquired the castle from the Lichtenburks. In 1335, he sold it to the nobleman Zbyněk Zajíc.

The name Zajíc is translated into German as Hase, which means “hare” in English. The German name of the castle – Hasenburg – is derived from that family name and can be understood as: “the castle of the Hase family”. The Czech version “Házmburk” is a phonetic adaptation of the German name. Some sources spell it as “Hazmburk”. However, in the official presentation of the castle, a long “á” is used and this spelling is used in this article.

At the end of the 16th century, the Zajíc family abandoned the castle and it has become dilapidated over the centuries. In its prime, the castle was 170 m (558 ft) long and 30 m (98 ft) wide. At the beginning of the 20th century, the castle was already a ruin. Two towers have been preserved. The lower one is round and 25 m (82 ft) tall. It is called the Black Tower (Černá věž). The upper tower with battlements is called the White Tower (Bílá věž).

There is a lookout in the White Tower. However, it was closed to the public in September 2017 for technical reasons. At the time of writing, it was unknown when it would re-open.

The nearest train station is in Slatina (a.k.a. Slatina pod Hazmburkem). The distance to the ruins is approx. 3.5 km (2.17 mi). Another train station is in the nearby town of Libochovice. More convenient is going to Klapý, because it is much closer. There is a parking place and a bus stop in that village.

If you decide to go there while you’re staying in Prague, it is possible visit the ruins and to return on the same day. If you’re going by public transportation, a one-way trip should take about 2 hours, but it requires at least one change.

There are several options, for example: going by train to Lovosice and taking the bus no. 552665 from there. The timetables with very detailed listing of available options can be checked here. As the destination, enter Klapý. There is an English version, but you must notice and click on the rather small UK flag. You can also go to Házmburk via Libochovice and see the beautiful Baroque chateau in that town.

The ruins are open to the public from spring until early autumn. Opening times can be checked here (in Czech only, at the time of writing).

Are you coming to Prague by plane and need simple transportation from or to the airport?
Booking your airport transfer service in advance will save you the hassle of using public transportation and will protect you from being overcharged by street taxis. Prague Airport Transfers is the market leader in Czechia, providing its services since 2006. Since then, millions of passengers have chosen their convenient transfer and private transportation services for a fixed price. The fleet consists of sedan cars, minibuses and limousines. Your English-speaking driver will take you to your hotel in Prague or even to other cities in Czechia and Central Europe for a fixed price. Check the prices and book your transportation.
Interests: castles and chateauxhistory ruins
Image Credits (from top to bottom, and left to right):