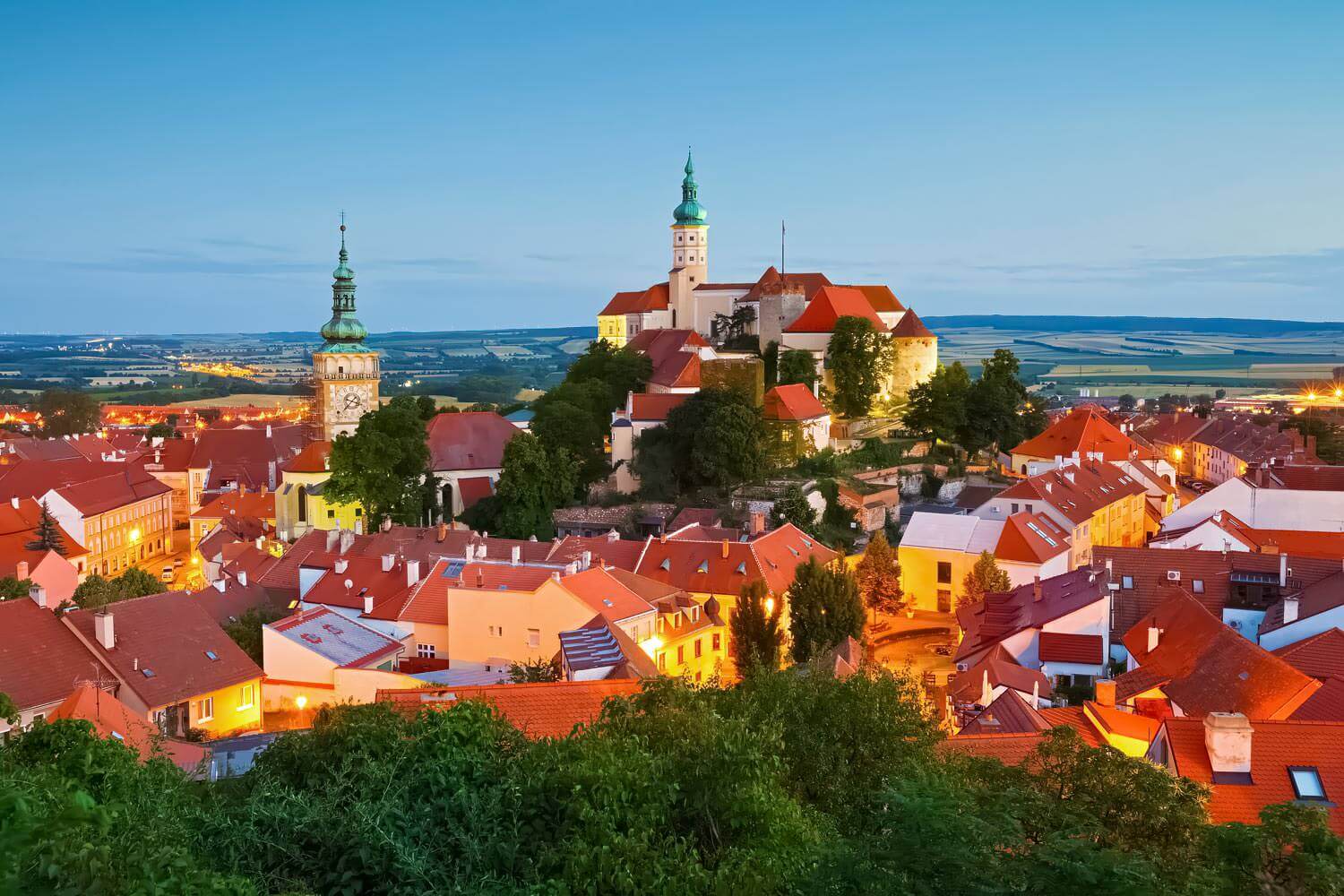 Mikulov is a beautiful old town in South Moravia, in Břeclav District. The town boasts very well-preserved historic architecture. The highlight is Mikulov Chateau, situated on a hill and dominating the landscape. Charming market squares are relatively common in Czech towns, so the one in Mikulov might not surprise you, if you have seen several or more if them before. Nevertheless, it is very pretty and definitely worth seeing.

Also, the surrounding area is very attractive for tourists. The region is very famous for wine-making and wine tourism is popular there. The 65-kilometer (40 mile) long Mikulov Wine Trail starts in the town. The wine region around the town is called Mikulovská, and it is one of four wine regions in southern Moravia.

Most popular here are white wine varieties and they occupy about 80% of the region’s vineyards. The most common varieties are Welschriesling (Ryzlink vlašský) and Grüner Veltliner (Veltlínské zelené). The character of Mikulov wines is affected by the varied soil rich in lime and favorable climate and it was appreciated already by the ancient Romans.

Things to See in Mikulov

The aforementioned Mikulov Chateau (Zámek Mikulov) can be seen from far away, thanks to its location on a hill. The original Mikulov Castle was built in the Romanesque style in the early Middle Ages. In the 16th century, the family of Dietrichsteins, who owned the castle at that time, started to rebuilt it in a more contemporary style. In its present form, it was reconstructed after a fire in 1719.

The chateau is open to the public and houses a regional museum. Visitors can see various valuable artefacts related to the history of the town, and an impressive library, which has maintained its 18th century character. There is also a viticulture exposition, where all wine lovers can learn more about the history of Moravian wine making.

The museum in the chateau can be visited from April to November. Opening times and admission fees can be found here.

As many other Czech towns, Mikulov also boasts a very pretty central square. It is not a particularly large square and its name is simply Naměstí, which means nothing else than… square. The highlights of the square are:

Next to the northeastern corner of the square, you will find the Dietrichstein Tomb (Dietrichsteinská hrobka). It is part of St. Anne’s Church and it is the family sepulchre of the Dietrichsteins – former owners of the chateau and estates in the region. The tomb can be visited for a small admission fee.

Svatý Kopeček (Holy Hill) can be seen from many places in the town. Because a number of rare plant and animal species can be found there, it has been declared a nature reserve.

The hill also has a religious character and hence its name. You will find there the Pilgrimage Chapel of Saint Sebastian, a bell tower and another smaller chapel.

And of course, if you decide to climb the hill, you will be rewarded with an amazing panorama of this beautiful Moravian town.

In the past, Mikulov used to have a sizeable Jewish population who played an important role in the history of the town. The Jewish cemetery in Mikulov has been a witness of this past. It is a relatively large cemetery because it contains approx. 4,000 tombs. It was founded in the mid-15th century and the oldest surviving tombstone is from the early 17th century. The cemetery is located north of the chateau, within walking distance from the town’s centre.

Kozí Hrádek (Goat Tower) is located very close to the Jewish cemetery. It is a late-Gothic tower situated on top of a hill. It had a defensive function and controlled the important road from Brno to Vienna. The tower can be visited for a small fee. It is open when you see a flag flying at the top. Alternatively, you can make an arrangement by phone: +420 608 002 976.

Getting to Mikulov by public transport is easy. There are some direct trains from Brno. However, more frequent are connections with changing the train in Břeclav. The journey time is similar in both cases: about 1 h 25 minutes. You can check the timetable here. Several long-distance international trains stop also in Břeclav. There is a direct connection from Prague to Břeclav.

Would you like to stay in Mikulov for a few days? Here are some great accommodation options: