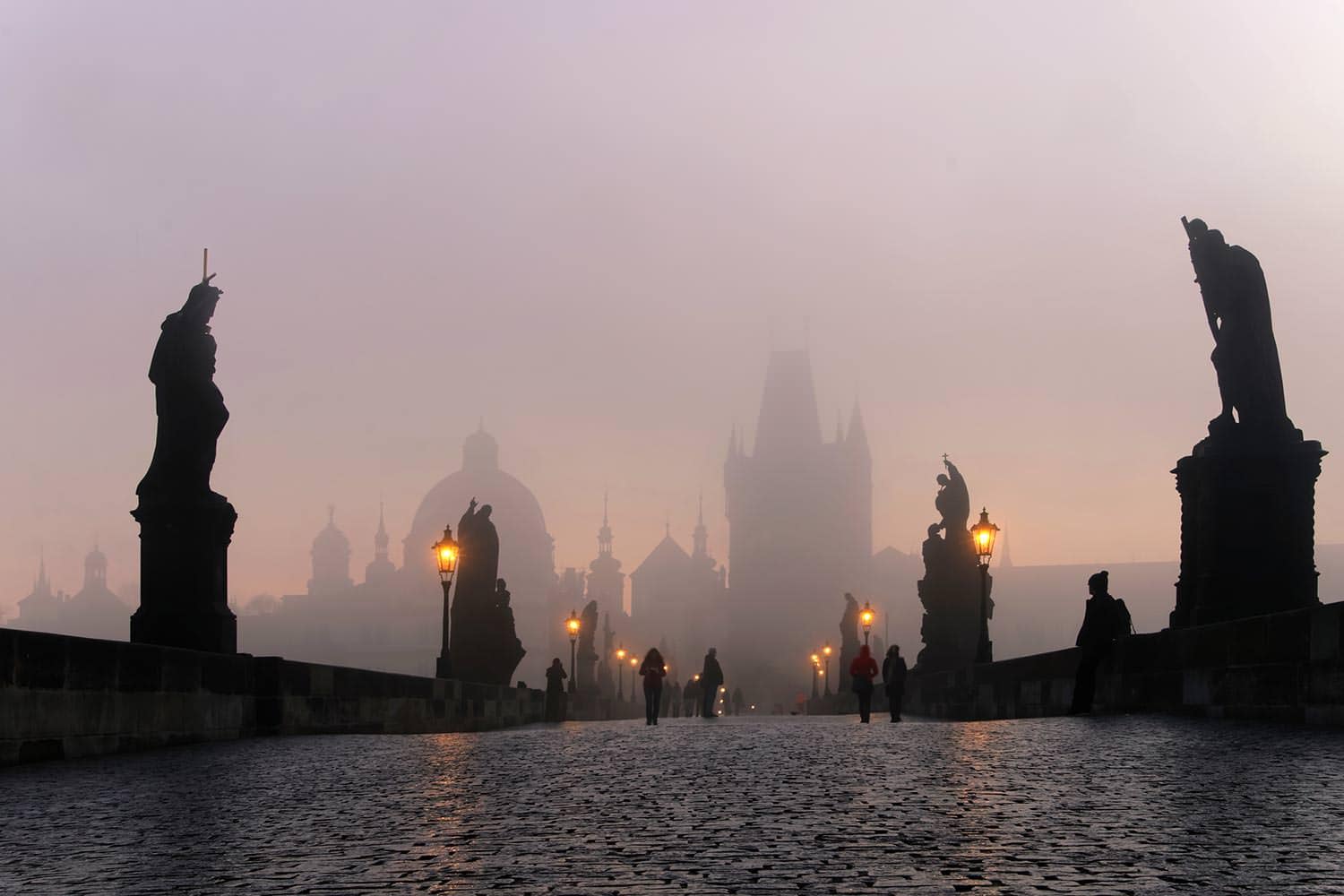 Charles Bridge (in Czech: Karlův most) is an iconic landmark in the very centre of Prague. The bridge crosses the Vltava river and connects the Old Town (Staré Město) with the Lesser Side (Malá Strana). It is not the oldest Czech bridge, because this title goes to the Stone Bridge in the town of Písek in South Bohemia. But Charles Bridge is definitely the most famous bridge in Czechia and perhaps also in the whole of Europe.

Most of the time, Charles Bridge is a crowded place. No tourist can miss it. And many of these tourists don’t just cross it; they tend to hang out there, take selfies and look at all the souvenirs offered by the numerous vendors present there.

It is not a bridge you can simply cross to get to the other side of the river; you must admire the bridge and its surroundings. If you’re a photographer and would like to have photos of the bridge without crowds of random people, the only way is to get there before dawn. But even then, it can take some patience to capture Charles Bridge without people.

The construction of the bridge started in 1357 and the work was completed at the beginning of the 15th century. The balustrades are decorated with 30 statues added during the Baroque period. In the 20th century, the statues were replaced with replicas and the originals were moved to a museum.

Not many people know it, but the name Charles Bridge is relatively recent. Until 1870, it was called “Stone Bridge”, just like the aforementioned bridge in Písek, or simply “Prague Bridge”.

As a matter of fact, there are two Lesser Side Towers, next to each other. The older and smaller Romanesque tower is from the 12th century. The taller, Gothic tower is from the 15th century and it resembles the tower on the opposite side of the bridge.

The opening times and the entrance fees can be found here:

How to Get to Charles Bridge

Finding Charles Bridge is simple. It connects two most important areas of tourist interest in Prague: the Old Town (Staré Město) and the Lesser Side (Malá Strana). If you are going from the Old Town to Prague Castle you may cross the Vltava on Charles Bridge. This is not the only bridge that can take you there, but this route is perhaps the most picturesque.

The nearest underground (subway) stations are: Malostranská on the left bank and Staroměstská on the right bank. They are both on the Line A of the Prague Metro.

Several bus and tram stops are a little closer to the bridge than these metro stations. You can take the tram lines 2, 17, 18 and 93 to Karlovy lázně and walk from there to the bridge along the right bank of the Vltava. On the left bank, you can take the tram lines 1, 12, 20, 22, 23, 41, 97 and get off at Malostranské náměstí. From there, you’ll walk a few minutes down the rather pretty Mostecká Street, and when this street ends, you’ll find yourself on Charles Bridge.

During the 20th, and the early 21st century, Charles Bridge underwent several renovations. Regular repairs are necessary to preserve this masterpiece of medieval architecture for future generations.

The authorities have announced plans to begin the next stage of renovation work in the late 2019. It is expected that the work will take around 20 years. During this period, sections of the bridge may be covered with scaffoldings. Therefore, if you would like to capture the classic view of this iconic bridge in a photograph without any scaffoldings, it may be a good idea not to postpone your trip to Prague for later. Information and advice about travelling to Prague and Czechia are on this page.

Are you coming to Prague? How about staying near Charles Bridge?
Here are some great hotels near this amazing place:
Are you coming to Prague by plane and need simple transportation from or to the airport?
Booking your airport transfer service in advance will save you the hassle of using public transportation and will protect you from being overcharged by street taxis. Prague Airport Transfers is the market leader in Czechia, providing its services since 2006. Since then, millions of passengers have chosen their convenient transfer and private transportation services for a fixed price. The fleet consists of sedan cars, minibuses and limousines. Your English-speaking driver will take you to your hotel in Prague or even to other cities in Czechia and Central Europe for a fixed price. Check the prices and book your transportation.
Interests: architecturecities Gothic history World Heritage Sites
Image Credits (from top to bottom, and left to right):