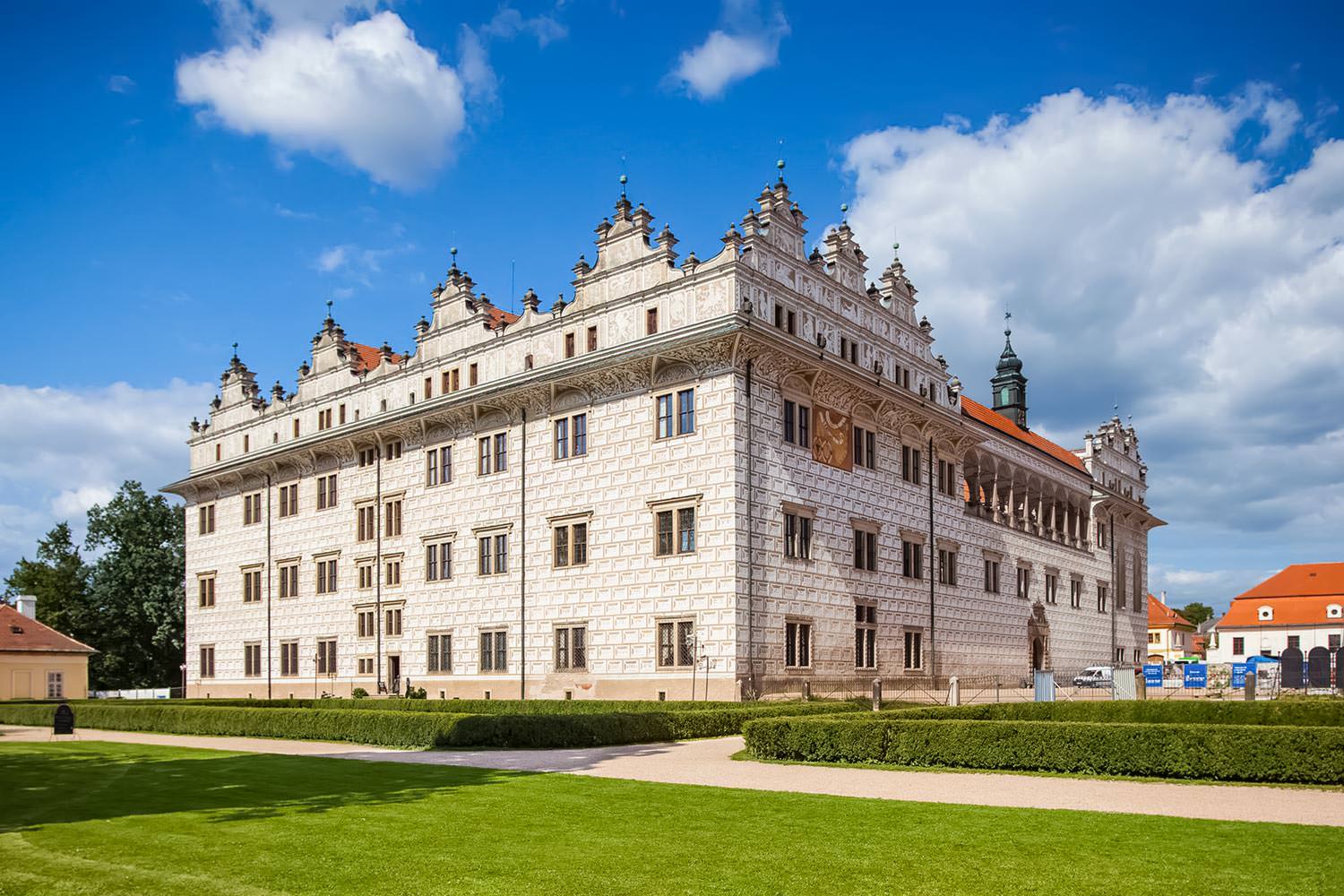 It resembles rather a chateau than a castle. Also, the Czech name is zámek Litomyšl and the word zámek is usually translated into English as “chateau”. However, in the official presentation in English, it is referred to as a “castle”, and as such it was inscribed on the World Heritage List. Therefore, the same word is used in this article.

Getting to Litomyšl Castle is easy. The town of Litomyšl is quite small, and as you can see on the map above, it’s only a very short walk from the train station to the castle. The station in Litomyšl has several connections per day from Choceň and Vysoké Mýto.

If you would like to go there from Prague, the train journey with stops takes about 2 hours 20 minutes one way, when using the fastest connections. If you change to a bus line in Česká Třebová or Pardubice, you will have additional options. Therefore, Litomyšl is quite a good place for a day trip from the Czech capital, especially if you’re into visiting World Heritage Sites. This website offers a convenient way to check the timetables (there is an English language version, too).

Thanks to historical documents, it is known that there had been a medieval castle on the site of Litomyšl Castle. In the 16th century, Vratislav of Pernštejn acquired the castle and decided to rebuild it in the Renaissance style. The architects were  Giovanni Battista Aostalli und Ulrico Aostalli. The castle was completed in 1581, after 13 years of construction work.

The aristocratic family of Trauttmansdorffs (Trauttmansdorffové) acquired the castle in 1649. They redesigned some of the castle’s interiors in the Baroque style and the work was conducted by Franz Maximilian Kaňka.

In 1758, the Waldsteins (Valdštejnové) became the new owners and their contribution was the castle family theatre. The famous Czech composer Bedřich Smetana was born in the castle’s brewery in 1824. His father served as a brewer at the court of the Waldsteins.

Nowadays, Litomyšl Castle is owned by the Czech state. It is a fine example of a Renaissance arcade castle and one the greatest tourist attractions in the Pardubice Region.

Would you like to stay in Litomyšl for a few days? Here are some of the best accommodation options:
Are you coming to Prague by plane and need simple transportation from or to the airport?
Booking your airport transfer service in advance will save you the hassle of using public transportation and will protect you from being overcharged by street taxis. Prague Airport Transfers is the market leader in Czechia, providing its services since 2006. Since then, millions of passengers have chosen their convenient transfer and private transportation services for a fixed price. The fleet consists of sedan cars, minibuses and limousines. Your English-speaking driver will take you to your hotel in Prague or even to other cities in Czechia and Central Europe for a fixed price. Check the prices and book your transportation.
Interests: architecturecastles and chateaux Renaissance sgraffito World Heritage Sites
Image Credits (from top to bottom, and left to right):