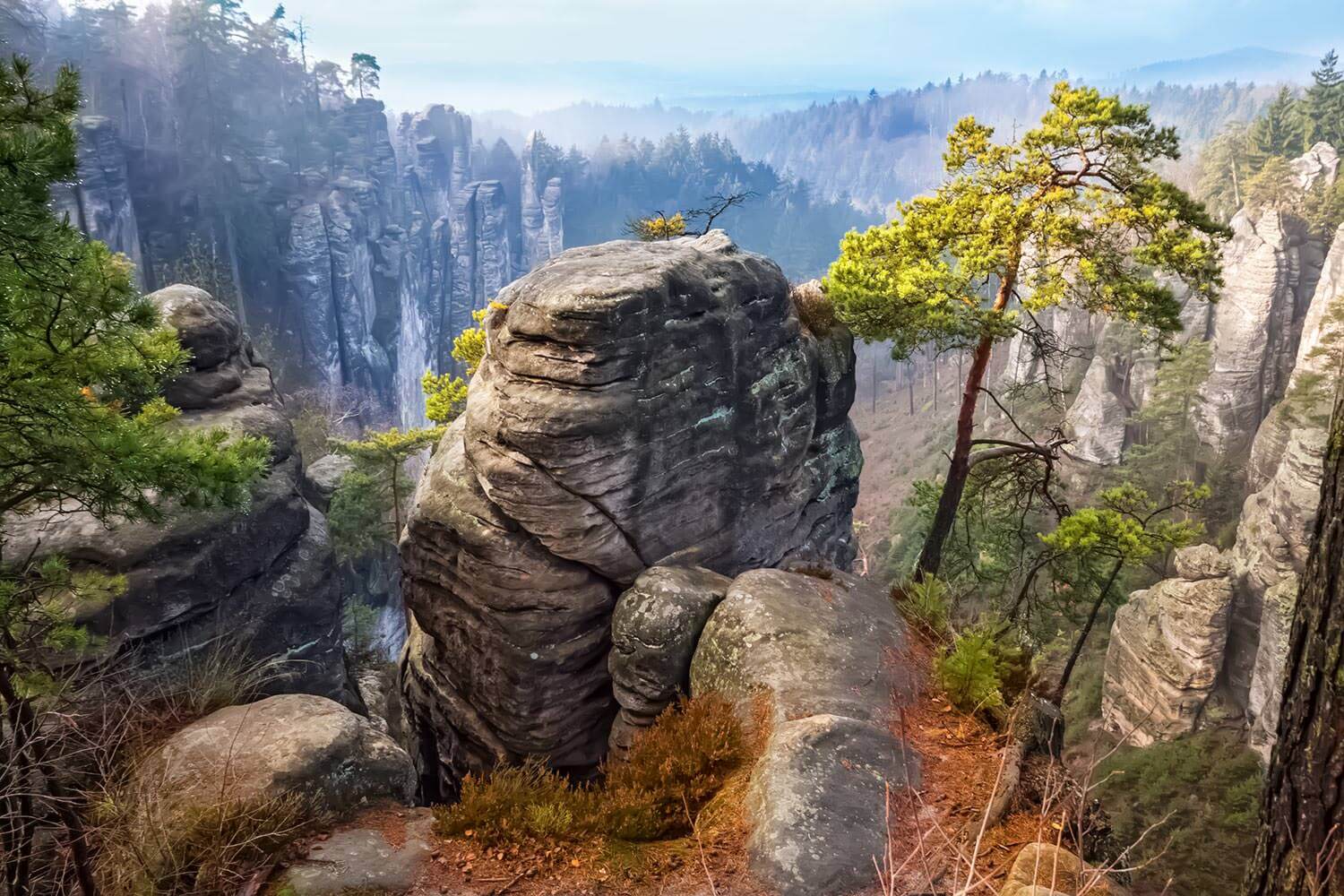 Bohemian Paradise, known in Czech as Český ráj, is a region and a protected landscape area about 90 kilometers north-east of Prague. It belongs to the most popular tourist destinations in the whole of Czechia. Thanks to the spectacular beauty of the landscape and the high concentration of historic landmarks, the region has been very popular among artists of all kinds.

The word “Bohemian” in the region’s name has nothing to do with “bohemians” in the sense of socially unconventional persons. The name is derived from Bohemia, which is one of the historical Czech lands, along with Moravia and Silesia.

The tourist region doesn’t have clearly defined borders. It is generally assumed that the region covers roughly the area between the towns Mladá Boleslav, Sychrov, Bozkov, Nová Paka, Staré Hrady and Libeň. It is thus divided between three administrative regions of the Czech Republic (Central Bohemian, Hradec Králové and Liberec) and within these regions between five districts (Jablonec nad Nisou, Jičín, Liberec, Mladá Boleslav and Semily).

There is a number of significant towns in, or near Bohemian Paradise. They are easily accessible by public transportation and can serve as your base for exploring the region. Major towns in the region include Jičín, Nová Paka, Semily, Turnov and Železný Brod. You can reach them by train or bus from Prague, Hradec Králové, Liberec or Mladá Boleslav. More information about travelling in Czechia and where to find timetables can be found on this page.

Things to See in Bohemian Paradise

The Prachov Rocks, in Czech called Prachovské skály, are sandstone pinnacles, situated about 5 km (3.1 mi) northwest of the beautiful town of Jičín. These iconic rock formations are one of the most recognizable symbols of Bohemian Paradise. The entrance to the area is paid, but the fee is quite low. There is a parking lot and basic tourist infrastructure at the entrance. Several lookouts (in Czech: vyhlídka) offer fantastic views of the Prachov Rocks.

The Hrubá Skála Rocks, or Hruboskalsko, are another area with picturesque sandstone formations. They are situated approx. 6 km (3.7 mi) southeast of Turnov, near the village of the same name (Hrubá Skála). The highlight of this part of Bohemian Paradise is Hrubá Skála Castle, situated on top of a sandstone rock. Nowadays, the chateau houses a hotel, hostel and a restaurant.

The Příhrazy Rocks (Příhrazské skály) are situated near the village of the same name, east of the town of Mnichovo Hradiště. They are perhaps less famous than the Prachov Rocks or the Hrubá Skála Rocks but hiking fans should not regret visiting them, as the scenery there is very pretty, too.

Kost Castle is an impressive, well-preserved Gothic castle in the village of Libošovice in Jičín District.

The aforementioned Hrubá Skála Chateau is located about 6 km (3.7 mi) southeast of the town of Trutnov. The location is extremely picturesque, the chateau stands on top of a steep sandstone rock of the same name.

The ruins of Trosky Castle are situated approx. 10 km (6 mi) south of the town of Semily. The castle was built on top of a hill and its ruins can be seen from far away, which makes it one of the most recognizable landmarks of Bohemian Paradise.

Drábské Světničky is a former rock fortress with great views of the surrounding landscape. It is located near the town of Mnichovo Hradiště, northeast of the village of Dneboh, in the Příhrazy Rocks. It is quite popular among tourists and hikers because of the nice panoramic views. The entrance is free.

Valdštejn Castle is one of the oldest castles in Bohemian Paradise, it was built in the 13th century. The castle is located near the town of Turnov.

The ruins of Frýdštejn Castle are located near the village of the same name in the Semily District. It is an impressive rock castle built in the 14th century. The nearest bus stop is approx. 1 km (0.62 mi) away and its name is Frýdštejn, náves. There is a parking place not far from the ruins.

Ruins of another picturesque rock castle are located in the nearby village of Malá Skála. This castle is called Pantheon, Vranov or simply Skála (skála means “rock” in Czech). There is a railway station in Malá Skála, with connections to Liberec, Pardubice, Hradec Králové, Turnov and Praha Masarykovo nádraží. From Malá Skála, you can also walk to Frýdštejn, because the distance is only approx. 3 km (1.86 mi).

The ruins of Valečov Castle are located in the village of Boseň near the town of Mladá Boleslav.

Sychrov Chateau is a very well-preserved, large Neo-Gothic chateau from the 19th century. It is located approx. 6 km northwest of Trutnov. The chateau owes its current style to the French aristocratic Rohan family who owned it for 125 years. They decided to rebuild the existing Baroque castle in the Neo-Gothic style, which was popular in the 19th century. The museum in the chateau has one of the best collections of French portrait paintings in Central Europe. You can also see there Italian paintings from the 14th century and a collection of Czech glass paintings.

Would you like to stay in Bohemian Paradise longer? Here are some great accommodation options:
Interests: castles and chateauxhiking landscapes nature
Image Credits (from top to bottom, and left to right):